Back to Blog
Regional NewsResearch and Data Analysis

According to the Workforce Intelligence Network for Southeast Michigan’s (WIN) latest labor market reports analyzing postings for Q3, 2017 is another year of economic growth in southeast Michigan. Using the labor market as a benchmark for measuring economic growth in the region during Q3 2017, both the labor force and employment grew, which shows that the supply of workers increased as well as the number of people holding jobs. This period of growth represents the seventh consecutive year of labor market growth from the recent lows of the Great Recession during 2009 and 2010. The volume of online job postings remained high in Q3 2017, indicating strong employer demand moving into the fourth quarter in a variety of occupations requiring different experience and educational requirements. With postings, employment, and the labor force steadily increasing since 2008, southeast Michigan’s labor market continues to strengthen each year.

There were 159,191 online job ads in southeast Michigan during Q3 2017. This is a slight decline compared to the number of postings during the Q1 and Q2 2017, but is 6.6 percent larger than the volume of postings open during Q3 2016, one year ago. This is the third quarter in a row where there were over 150,000 postings, which helps continue the upward trend of postings over the last seven years. The ongoing increase in job postings shows that employers are seeking workers, which is good news for job seekers. 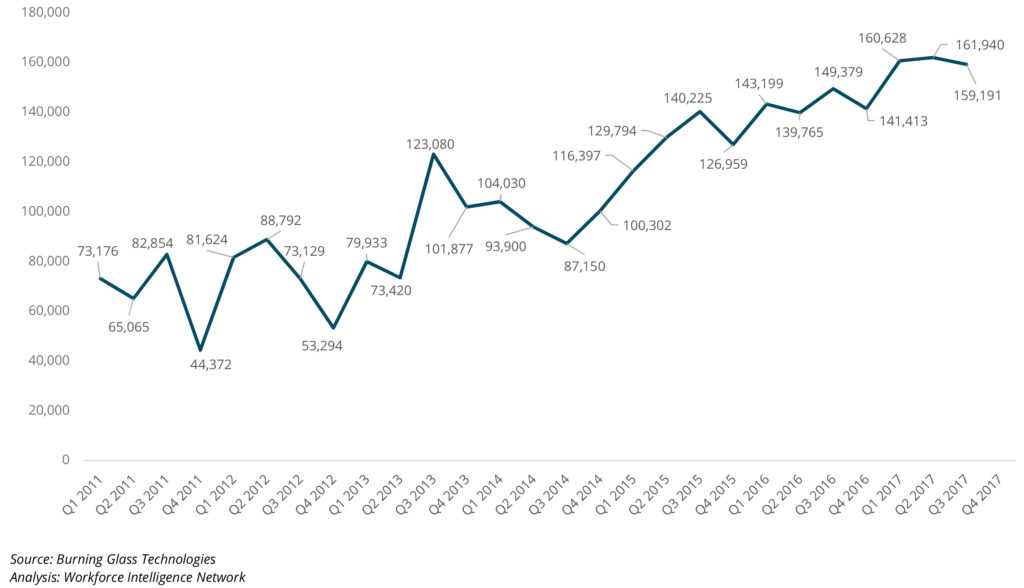 Total Postings Over Time for the WIN 16-County Region

Over half the postings this quarter (79,770 postings) requested applicants have a specific experience level. Most of these postings (40,097 postings) were looking for applicants with 0 to 2 years of experience or entry-level workers. This represents an opportunity for job seekers with fewer than two years of experience, though many of these postings do require some post-secondary education or a certification. With the high volume of entry-level postings, job seekers looking to change fields or those entering the workforce have more opportunities available to them.

To identify key areas for job seekers, workforce development organizations, and training and education institutions, WIN constructed occupation groups consisting of jobs within similar fields to identify high-demand jobs with similar skill and educational requirements. Of these occupation groups, the Customer Service group witnessed the most postings with 35,593 online job ads. Health Care and Information Technology occupation groups round out the top 3 with the most postings, with 23,304 Health Care related postings and 16,523 Information Technology related postings. The top jobs posted in the region come from a variety of these occupation groups, showing opportunities over many occupational fields. The top five in-demand occupations during Q3 2017 include Registered Nurses, Heavy and Tractor-Trailer Truck Drivers, Software Developers, Applications, Retail Salespersons, and Sales Representatives in Wholesale and Manufacturing. These top in-demand jobs cover a variety of skills, education levels, and fields, showing opportunities throughout each of the occupation groups analyzed by WIN for job seekers with varying skill sets. Further analysis, including postings, wages, and employment of these occupation groups, can be found in the WIN Labor Market reports.

Many of the postings analyzed by WIN in the labor market reports share salary information to help give an understanding of wages offered in these jobs. While these averages do not necessarily translate into direct earnings in the labor market, as postings do not necessarily lead to new hires at their advertised rates, they do give a rough indication of whether there are well-paying jobs available. The median advertised wage from the job postings listing salary information for the region was $42,000 per year. The median advertised wage from job postings across the state of Michigan was slightly less, at $40,000 per year, but both fell short to the national median of $48,000 per year. The average advertised salaries between the region and the state tell a similar story. This average advertised salary in southeast Michigan was $56,000 per year. This is $4,000 greater than the $52,000 average advertised salary for the state, but again, fell short of the national average of $59,000. Although these wages may show higher earning potential within the state, they are not quite up to par when compared to the national averages. This could be due to large number of entry-level postings, showing that the area is more focused training new talent for the workforce, as well as a lower cost of living in the state, and leftover effects of a weaker labor market in recent years.  Overall, job postings show strong signals for the labor market in the greater southeast Michigan area.

Employment in the 16-county region analyzed by WIN reached 2,669,917 workers in Q3 2017. This is a 1.8 percent increase in the number of job holders from one year ago, with 46,394 more workers than the 2,623,523 employed in Q3 2016. Comparing the most recent annual employment numbers for 2017 to that during the 2010 recessionary period, employment has increased by 11.8 percent to 2,783,938 workers. A total of 280,114 more workers have found employment between these eight years. Each year after the recession, employment has seen an increase in workers creating a strong upward trend. The last period of stable economic growth seen between 1991 and 2000 lasted for nine years with employment reaching over 2.9 million workers in the area. The upcoming year will tell more of a story on the outlook of the region’s employment, but data from Q3 2017 indicates that employment is poised to continue growing as employer demand remains high.

The labor force also grew in Q3 2017. The number of people in the labor force is the figure used to measure how many people who are of working age are working or actively searching for work and is utilized to measure the unemployment rate. During Q3 2017, there were a total of 2,798,947 labor force participants. This is 24,405 more than the 2,774,542 participants during Q2 2017. When compared to a year ago, the labor force only increased by 15,427 participants, showing the labor force to be more volatile in growth each quarter. The annual labor force numbers have been increasing slightly each year since the 2011 low point. Despite the recession hitting 2009 and 2010, it likely discouraged many participants to pursue more education, find work in other locations, or stop looking for work until the economy improved, causing the decrease to continue a year after recession impacted the economy. As the economy has recovered, these numbers have slowly started to trend upwards again. The labor force has not improved to prerecession levels yet, but as employer demand consistently remains high, it is expected that more people will be attracted to the area to search for jobs and work.