Back to Blog
Career Awareness, Readiness & PathwaysNext-generation Work and LearningPolicy 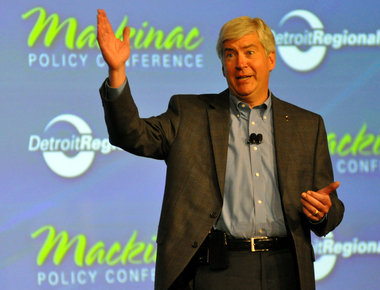 LANSING, MI — Gov. Rick Snyder is inviting the best and brightest minds in Michigan business to Detroit next week, where he will host an economic summit focused on regional collaboration and identifying talent needs to drive future growth.

“This is a working summit,” Snyder told MLive on Friday. “This isn’t just a summit where you come and listen to a bunch of speakers, have lunch and leave. We help set the stage with some general framework, but then a lot of hard work goes on to come out with real output and real product in terms of saying ‘This is what the private sector needs.'”

Snyder is among a series of speakers, including Business Leaders for Michigan CEO Doug Rothwell and economist Paul Traub, who will address attendees prior to breakout brainstorming sessions, which will be grouped by economic region and industry. The event is designed as the first of a two-step process that will continue with an education summit in April.

The goal, Snyder said, is to connect those two worlds.

“We’re focusing as a state to say the jurisdiction that does the best job matching supply to talent will have a strong strategic advantage over other parts of the country or the world, and I want us to be a leader in this, because it’s critical to a bright future and having more and better jobs for everyone.”

Snyder and his GOP colleagues in Lansing have sought to make Michigan more competitive for job creators through regulatory reform and elimination of the state business tax. While the state has grown jobs since the economy bottomed out in 2009, and is expected to continue on that path this year, Michigan’s remains 45th in the nation with an unemployment rate of 8.9 percent.

But that’s not necessarily due to a lack of jobs. The state’s new online portal, mitalent.org, lists more than 63,000 open positions. Filling each one of those jobs could reduce the state unemployment rate by roughly 1.5 percent. But the problem, according to many experts, is that there is a disconnect between the type of jobs available and the current skill set of the Michigan workforce.

As of 2009, roughly half of the jobs in Michigan were middle-skill occupations requiring more than a high school diploma but less than a four-year degree, according to the National Skills Coalition, which said that only 45 percent of state workers had appropriate training. “This gap will continue without new investments,” according to a report.

While Snyder has taken heat for cutting the higher education spending in his first budget, he’s proposed modest increases each of the past two years. And recognizing that manufacturing remains an important part of the Michigan economy, Snyder has focused on encouraging skilled trades training at the community college level.

His executive budget recommendation for fiscal year 2014 includes $10 million in performance funding for community colleges that reach certain goals, including the placement of students in skilled trades apprenticeships. In 2015, Snyder is calling for a new $50 million “capital challenge” to help community colleges update their facilities with the new equipment to match the changing technology demands of employers.

“Employers need people with more specialized skills, particularly when they start, than what they used to require,” Snyder said. “For example, you’re going in now where if you’re a skilled trade person you need a specialized skill to run a certain piece of machinery or equipment, or you need a certain kind of engineer, and we need to help make that connection.”

Michigan’s recent economic upswing — the state added 47,300 jobs in 2012 and is expected to add about as many this year, according to University of Michigan economists — has been driven largely by the auto industry. And while some experts fear the state’s reliance on manufacturing belies a lack of knowledge-industry jobs, others say modernization of auto companies and suppliers is creating a demand for a high-skilled workforce.

“I don’t walk away form the auto industry, because it’s making a resurgence,” Snyder said. “Manufacturing is still important, in my view, but we do need to continue to expand. I think we are growing the right kind of jobs relative to the rest of the country.”

The 2013 Governor’s Economic Summit is scheduled for March 18 and 19 at the Cobo Center in Detroit. Those who wish to attend the “invitation only” event can fill out a web form at michiganadvantage.org.

Jonathan Oosting is a Capitol reporter for MLive Media Group. Email him, find him on Google+ or follow him on Twitter.