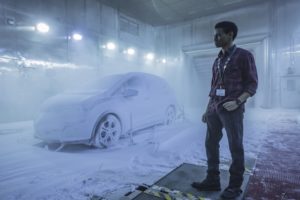 Once a week, students at Cristo Rey High School in Detroit’s Mexicantown check into class and then jump into a van to be driven to a job in the city or a far-flung suburb.

The businesses and work settings vary from the engineering labs of General Motors Corp.’s Tech Center in Warren to a birthing center at St. Mary Mercy Hospital in Livonia.

The private Catholic school’s 300 students are working not just to gain future employment skills. Their enrollment is contingent upon working to support the school’s bottom line in lieu of a five-figure tuition bill that would be out of reach for the school’s low-income Hispanic and African American families.

Officials at the 75 employers in the program see it as a pipeline to talent that should be replicated elsewhere in Michigan’s education system to expose teenagers to potential career paths.

“If I take a 14-year-old kid from Detroit and sit them next to a kid who graduated from MIT, it makes them believe, ‘Well, if this guy can do it, I can do it,'” said Joaquin Nuno-Whelan, GM’s chief engineer for the next generation of full-size SUVs.

Cristo Rey High School, which has grown from 72 students since opening in 2008, acts as a contract worker agency for employers, collecting $2.1 million in wages for its students’ labor to support a $4 million annual operating budget, said Michael Khoury, president and CEO of the school.

“We tell the kids, ‘If you don’t do a good job, they will fire you, not renew with us and then we won’t have money to pay the teachers and we won’t have a school. So this is real work you’re doing — and you’ve got to treat it like that,'” Khoury said. “That’s a lot to put on a 14-year-old or 15-year-old, but it’s true.”

The seriousness of Cristo Rey’s student work-study program has resonated with the businesses and nonprofits in metro Detroit that employ the students throughout the school year. Cristo Rey touts a 95 percent renewal rate among businesses employing its students.

“I think every child would benefit from a program like this. It enriches them. It enriches you,” said Deborah Ainsworth, who supervises four female Cristo Rey students at the high-risk pregnancy clinic at St. Mary Mercy Hospital in Livonia.

Ainsworth recently hired a 2015 Cristo Rey graduate who spent all four years of high school working in the birthing center, assisting nurses and tending to the needs of mothers.

“When she was here for those four years, she was a go-getter, she took initiative without being asked,” Ainsworth said. “Now, when there’s an emergency C-section, she’s the one running back there and opening up that (operating room) and having that blade ready for the doctor.”

Cristo Rey is located in the former Holy Redeemer High School on Junction Street in Mexicantown.

The student work-study emphasis of Cristo Rey’s curriculum began at a Catholic school in Chicago and has spread to 32 schools across the country with 3,000 corporate partners providing jobs for students, according to the Cristo Rey Network, which recently hosted a national meeting of its members in Detroit.

The school’s mission is devoted to being a collegiate pathway for students from families living at or below the poverty line. For the sixth year, 100 percent of the school’s graduating class of 60 seniors have been accepted into college.

The annual tuition for each student ranges from $500 to $700, depending on the family’s ability to pay. Some of the parents volunteer to drive the students to work each day as far away from southwest Detroit as Fiat Chrysler Automobiles’ headquarters in Auburn Hills.

Every August, the new freshman class of 14-year-olds begins school a month before the rest of the students for training in office etiquette.

The students learn how to answer phones, address superiors and other mannerisms for working in a corporate office atmosphere. The school already has a business casual dress code that the students adhere to off campus when they go to work.

The U.S. Department of Labor has granted the school a child labor law exemption for the 14- and 15-year-old students to work because it’s considered part of their education, Khoury said.

“Our whole premise is challenging the effects of poverty one kid at a time. And there’s nothing like education and a good job that can break that cycle,” assistant principal Joellyn Valgoi said. “It’s probably the single most unifying factor in their success in college.”

Businesses in the program hire varying numbers of Cristo Rey students. Some hire four or five so they get a different student each workday.

Cristo Rey senior Maria Salcido-Hernandez transfered into a job at Hylant Insurance Group’s office in Troy after not enjoying her previous job at GM. At Hylant, she works on audits of employer insurance plans, checking records of clients to ensure they are accurate.

“I really enjoy the work,” Salcido-Hernandez said. “It taught me how to work differently in a different environment.”

Salcido-Hernandez says she’s gained self confidence working Hylant that she didn’t have before as she had to comprehend complicated insurance records.

“I used to be really bad at that,” she said. “I wasn’t open to asking questions.”

After graduation, Hylant has hired her to continue working part-time at the office starting this summer while she attends Henry Ford College, where she plans to study nutrition.

“This is not something we normally do, but we felt like she was so good, we wanted to bring her back,” said Pat McDaniel, who runs Toledo-based Hylant Insurance’s three Michigan offices. “We hope when she graduates, she’ll want to join Hylant permanently.”

Salcido-Hernandez is going to college to become a nutritionist. When she arrived at Hylant, she expressed an interest in personal health care. The insurance brokerage found work for her to do in their employee wellness programs, McDaniel said.

“We’re trying some level of interest with some of the stuff we do,” McDaniel said. “Insurance isn’t always sexy, especially to high school kids.”

General Motors is the school’s largest employer with 50 Cristo Rey students working at the Renaissance Center, the Tech Center in Warren and a facility in Pontiac, Khoury said.

Most of the students participated in the FIRST Robotics team at Holy Redeemer Grade School, a K-8 feeder school next door to Cristo Rey.

“I see the way Cristo Rey is doing education and their intern program and FIRST Robotics as game changers in the future of education,” Nuno-Whelan said.

Nuno-Whelan said he puts his Cristo Rey students to work in hands-on projects. Some work on manufacturing processes, while others work on thermal development in a climatic wind tunnel, he said.

“I have a rule: if I see them only doing spreadsheet or clerical work, then their supervisor has to come talk to me,” said Nuno-Whelan, a 20-year veteran of GM.

Nuno-Whelan and other supervisors said the students build confidence in their skills and ambitions by being exposed to professionals and a work environment.

Recent graduates of Cristo Rey who worked at GM during high school are in the middle of college engineering programs and will be pursued by automakers when they graduate, Nuno-Whelan said.

“I see those students as our main recruiting targets two or three years from now when they graduate,” he said. “They will dominate when they enter the job market.”