There has been a lot of speculation lately as to whether the purported skills gap being touted around the country and right here in Southeast Michigan is the real thing. Various reporters have pondered this question, and respected economists have asked the same thing, including one from the Federal Reserve Bank of Chicago during the governor’s recent economic summit.

The reality is that there are a lot of factors that can contribute to a skills gap, and we are seeing a lot of those factors play out right here in our backyard:

1. Structural unemployment and/or rapid growth in a particular area of the economy. There is no doubt about it. In Southeast Michigan we have seen major turmoil in our regional labor markets. Unemployment soared above 16 percent during the peak of the crisis in fall 2010, compared to the national peak of 10 percent. Today, unemployment rate is hovering around 9 percent to 10 percent, but this is not necessarily all because of employment gains. In fact, a major contributing factor to the fall in unemployment in our region is the loss of over 200,000 people from our labor market. These individuals moved elsewhere, decided to retire, started a business, or otherwise stopped looking for work.

The important thing to understand is that a decline in unemployment is not just a reflection of people getting more jobs but also of the number of people looking for jobs. The good news is employment is trending upwards, but we are far from 2002 levels. Structural (long-lasting, more permanent) changes in the automotive, construction, and other industries have left many out of work. Meanwhile, rapid growth in information technology (there were 70,000 IT job postings in our region last year alone) makes it not so surprising that there is a mismatch between those looking for work and those with work to offer. Even in manufacturing, upsurges in employment demand are driven by areas like engineering (mechanical engineers were the top-demanded occupation in 2012), computer-numeric-control machining, and other occupations that require very specific skills. 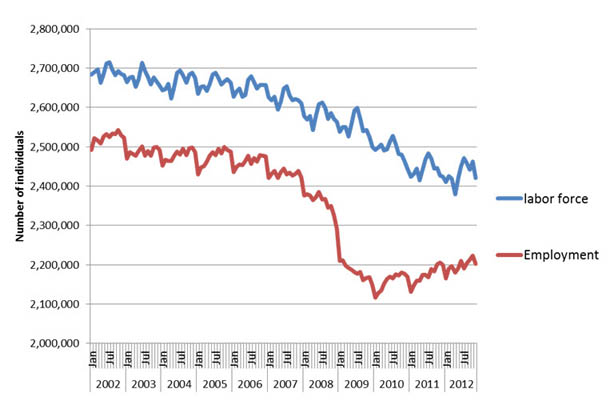 2. Production lags between generations of employers. This factor is a longer-term contributor to skills gap, and it is one that our region faces in spades. It seems a bit obvious days to point out that, as our workforce gets older, and there are fewer young people to replace them, that we will face an ongoing skills shortage. In the case of Southeast Michigan, this is not just a flippant statement—it is a real-live, in our faces, looming challenge.

In the last 10 years, employment for youth ages 14-24 fell by 24.5 percent (85,400 jobs) while employment for older workers age 55+ climbed 25.2 percent (76,100)—an almost perfect inverse relationship. In fact, older workers compose the only age group that saw an employment increase during the last recession while, at 30 percent, metro-Detroit’s youth unemployment rate is the highest of any metro area in the country. As older workers hang on longer, we are leaving our young people behind. They simply are not getting the skills and experience that employers want these days (typically 1-4 years of experience) in the new workers they hire. As our older workers inevitably leave the job market, younger workers will not be ready to fill their shoes (i.e., they will be less productive), and there are few guarantees that workers even just a generation or two behind them will be prepared either. Some may argue that technology will fill the void—but tell that to the regional technology employers who report more often than any other occupational segment that they are having trouble finding the workers they need for success. 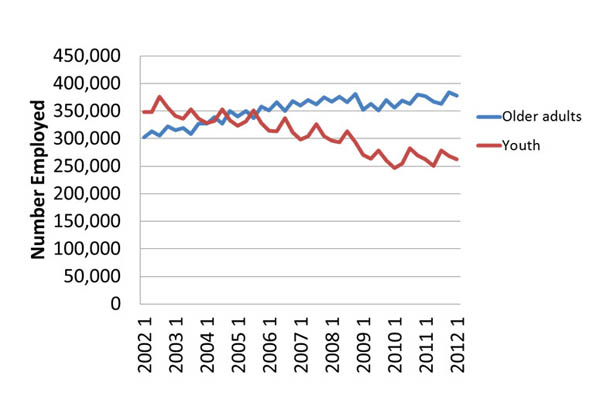 Differentials between wages and employer demands. This is the biggest thorn in the side of the skills gap debate. If there were really a skills gap, wouldn’t wages be going up? First, there are a lot of factors that are putting downward pressure on wages: shifts in unionization, which traditionally supported substantial wage premiums; globalization, both competition from workers overseas and the need to keep costs down to compete in overseas markets; new and uncertain costs of doing business, including energy price fluctuations and changes in health care, including new federal health regulations; and ongoing uncertainties in the economy, which make employers who survived the last down turn continue to want to stay lean.

Prior to adjusting for inflation, wages for production workers climbed 3% from 2007-11, health care practitioner wages climbed almost 4.5%, and IT wages climbed just shy of 1%. These three occupational groupings are among the most important to the Southeast Michigan economy and have exhibited the most employer demand based on job postings in the last year.

Wages for all three occupational groupings shift downward after adjusting for inflation, but there are key occupations among them for which wages still climbed. For example, mechanical engineering salaries climbed just over 4 percent. Among production workers, wages for team assemblers climbed 14 percent, CNC operators climbed 2.7 percent, CNC programmers climbed 3.9 percent, and general machinists climbed 3.5 percent. Among health care workers, wages for medical records and health IT workers climbed 4% and physicians assistants climbed 1.7 percent. In IT, wages for computer and information research scientists climbed nearly 27 percent and network and computer systems administrators climbed 6.3 percent. Several of these occupations also are among the highest demand in our region, based on analysis of employer job postings. The bumps up in wages are indications of the labor market correcting itself, but these adjustments may not happen all at once for every occupation, especially where some of the aforementioned wage pressures are particularly strong.

At the end of the day, whether one looks at how our economy has shifted structurally, demographically, or based on wages, the case can be made that the “skills gap” is alive and well in Southeast Michigan. And the lessons are increasingly clear: if employers want top-notch talent, they cannot afford to pay bottom-of-the-barrel wages, whileworkers who want good, well-paying jobs, must continually invest in enhancing their education and skills.

Fortunately, when it comes to short-term and long-term skills investments — both by workers and employers—efforts like the Workforce Intelligence Network (WIN) are taking the skills gap seriously. Through WIN, community colleges and Michigan Works! Agencies are collaborating with each other as well as employers, economic developers, universities, community based organizations and others to make sure the right programs and investments are in place at the right times to provide the talent that employers need for success. The skills gap is real, and solving it is an “all-hands-on-deck” proposition. Never before has the talent system been more coordinated to tackle the job.