Household income on the rise? Thank the kid living in your basement

Last fall, the U.S. Census Bureau released statistics showing that median household income increased by 5.2 percent from $53,718 in 2014 to $56,516 in 2015. The Census reported that this represented the largest percentage increase in median household incomes since it began tracking the metric in 1967. At first glance these data are good news, but there are some important nuances to understand before getting too excited, including competing data reports, rising household sizes and nonearnings-related sources of income.

What could be driving household incomes up, and is it in fact good news for Americans? Workforce Intelligence Network for Southeast Michigan (WIN) decided to take a closer look.

1. There is debate as to whether personal income has increased at all or at least to the extent the Census Bureau indicates.

The reason is the way in which the Census Bureau collects its personal income data. According to Gary Burtless, a senior fellow at the Brookings Institute, the Census derives its metrics from its annual Current Population Survey. Burtless explains that income estimates through the CPS have differed substantially compared to income estimates from the Commerce Department in recent years. The Commerce Department’s National Income and Product Account extracts data from actual income tax returns, undoubtedly forming more reliable estimates than information formed through household surveys. Those returns, as can be seen in the graph, indicate lower real per capita income (adjusted for inflation) than the CPS survey results. According to NIPA, there has been clear decline and relative stagnation in per capita income since the year 2000.

Part of the reason for income stagnation could be the types of jobs that have been gaining the most traction recently in the U.S. economy. Unfortunately, while more Americans are working since the recession (employment has increased by an average of 204,000 workers each month over the last year), many of the top jobs that have been filled do not pay particularly well.

From 2014-15, two-thirds of the fastest growing occupations in the United States did not require any post-secondary education and paid an average of $15.58 per hour, or a little more than $32,000 annually if workers were employed full time, year-round (which they most certainly were not). In comparison, the average U.S. worker with a high school degree (no college) earns $700 weekly, or $36,400 annually. 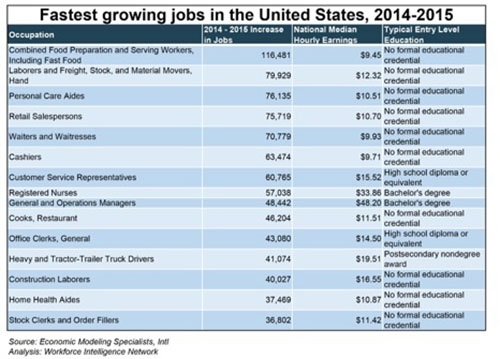 Of the top 15 fastest growing occupations, 12 require a high school diploma or less. For the top fifty fastest growing jobs in the United States, an astounding 76 percent required a high diploma or less. Overall, two-thirds of the jobs added in 2015 did not require any form of post-secondary education. These jobs generally pay less. In fact, the recent report that claimed the 5.2 percent jump in household incomes also found that there was no statistically significant increase in median earnings for individuals working full time, year round. Trends like those just described help to explain why.

2. The Census Bureau could be reporting that household incomes have been rising because there are more wage earners living in each household than ever before.

A recent analysis of census data by the Pew Research Center reveals that a record number of Americans live in multigenerational households (a household with two or more adult generations) as of 2014. One of the most sobering statistics from the analysis pointed out that “among a broader group of young adults, those ages 18 to 34, living with parents surpassed other living arrangements in 2014 for the first time in more than 130 years.”

3. Finally, other nonearnings sources of income might be influencing household incomes.

The Census Bureau’s definition of income includes more than just wages from a job. It also includes forms of income like dividends, Social Security, disability insurance, child support, etc. As of July, the number of Americans receiving Social Security Income increased to 65.6 million, compared to 64.2 million in 2015. Moreover, the share of working-age Americans receiving disability benefits has doubled to 5 percent since 1990. With the increasing number of Americans living in multigenerational households, a combination of more working individuals and retired or disabled family members could also possibly explain increases in household income.

While at first glance it may seem like good news that median household incomes are on the rise, the explanation of why is far from clear and is not necessarily (and, in fact, is unlikely) due to rising incomes. Despite more individuals entering the workforce, earnings for workers have not risen by any significant margin because many new jobs require low levels of skill and education. Instead, household income growth is likely caused by a combination of factors, including more workers per household and more nonearnings-based income.

The bottom line is that individuals are having to identify creative solutions to help their incomes stretch further in changing economic times. This includes multigenerational households, namely the proverbial college graduate living in the basement. Take heart, parents of college grads living at home: at least your household income will see a boost.