Back to Blog
Information Technology and CybersecurityNext-generation Work and Learning

Written by: Dan Fagella is the CEO and founder at TechEmergence, the only market research and company discovery platform focused exclusively on artificial intelligence and machine learning. Click here for original article.

A company by company examination of public investments by leading car makers and statements from their top executives makes it clear that most car companies are betting self-driving technology will be inevitable, and they’re all jumping in with investment and initiatives.

With billions of dollars in R&D and acquisitions, there’s plenty of fodder for media hype, but there haven’t been many concerted efforts to answer fundamental questions such as:

In this article, we set out to collect the facts and compile CEO quotes to determine the self-driving timelines of the world’s 11 largest automakers. Many businesses and industries will be impacted by the impending transitions in autonomous vehicle tech, and our aim is to put the most relevant facts together for business leaders and auto enthusiasts alike.

First, we’ll break down what “self-driving” means (there are five levels of autonomy). The rest of the article will be an ordered list of the 11 top automakers, followed by their predictions, executive quotes, and any noteworthy financial data about their self-driving initiatives.

Self-driving” is a rather vague term. For this article, we’ll be referencing the “self-driving levels” as defined by the SAE International. These can be viewed below: 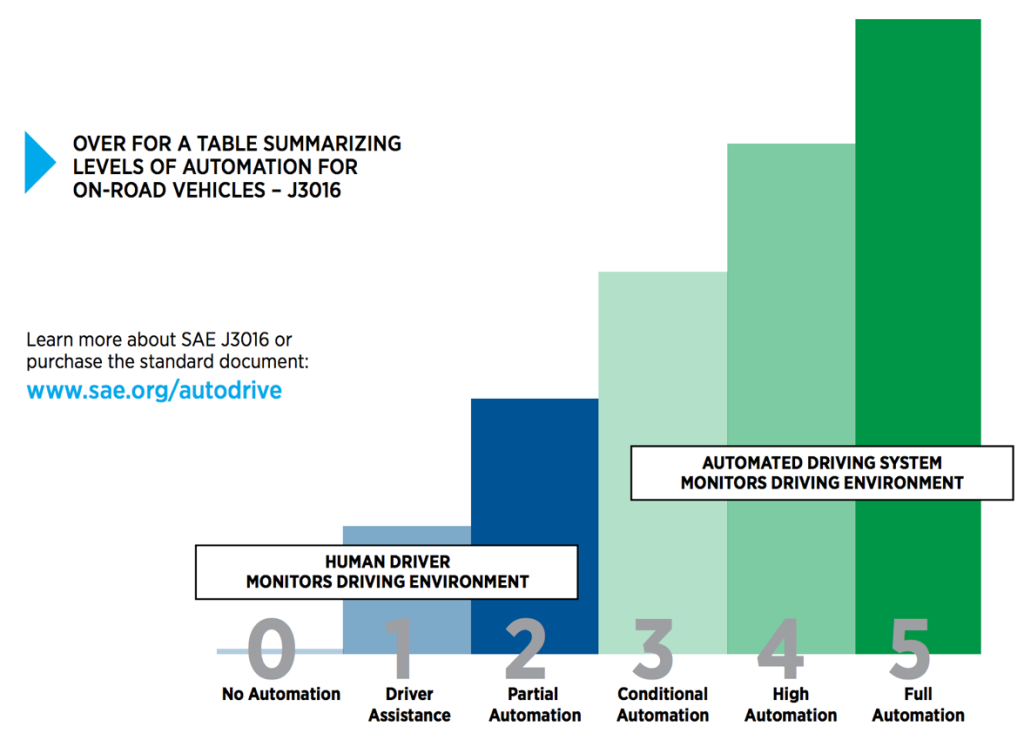 Since these levels don’t mean much to people outside the industry, car makers often don’t talk about their technology in these specific SAE terms. The big potential promise for people is either cars that drive themselves for a large part of a person’s highway commute (level 3) or cars that can almost drive themselves, as long as you live in a covered metropolitan area (level 4).

As you read the rest of this article, it will be useful to understand that most executives referring to “self-driving” vehicles are referring to levels 3 and 4. Whenever possible, we distinguish between what kind of self-driving a specific executive is speaking about (i.e. highway autonomy, or full metropolitan autonomy).

Unlike other big car makers, GM has not laid out a specific timeline for its self-driving cars, but the company has made it clear it’s moving aggressively in that direction. In December, GM CEO Marry Barra wrote, “We expect to be the first high-volume auto manufacturer to build fully autonomous vehicles in a mass-production assembly plant.” The focus will be ride-sharing, rather than the individual buyer.

According to Reuters, GM is rumored to have plans to deploy thousands of self-driving electric cars next year with its ride-sharing affiliate, Lyft. GM spent $500 million to buy a 9 percent stake in Lyft as part of its strategy to create an integrated network of on-demand autonomous vehicles. Making mobility as a service the first use of GM self-driving cars has several clear advantages. It means these cars will only need to be programmed to operate in a limited geographic area.

In February, Ford announced it was going to be investing $1 billion in Argo AI. The robotics company was created by former Google and Uber leaders. Ford plans to combine the expertise of Argo AI with Ford’s existing self-driving car efforts to have a “fully autonomous vehicle” coming in 2021. These vehicles will first be used by Ford for ride hailing applications.

Ford Motor CEO Mark Fields told CNBC that Ford plans to have a “Level 4 vehicle in 2021, no gas pedal, no steering wheel, and the passenger will never need to take control of the vehicle in a predefined area.” Ford actually plans to skip right over Level 3 automation and go straight to Level 4. In the company’s tests, chief technology officer Raj Nair found that level 3 automation would lead to engineers dozing off and not being situationally ready to take over when called on. CEO Mark Fields claims that Ford will have cars with no gas pedal and no steering wheel driving people around in select cities by 2021.

Honda: Self-driving on the highway by 2020

At the end of last year, Honda announced it was in discussions with Waymo, an independent company of Alphabet, to include Waymo self-driving technology in Honda’s vehicles.

Honda’s long-stated goal is to have cars that can at least drive themselves on highways by 2020. That is when Tokyo will host the Summer Olympics, and Japan hopes to make that a showcase of the company’s technological prowess.

Waymo isn’t the only tech company to partner with car giants. Expect similar acqusitions and partnerships with other autonomous tech innovators, like AImotive and Nauto, both of whom are listed under our robotics and vehicles company list.

Toyota: Self-driving on the highway by 2020

Toyota has been one of the most skeptical car companies when it comes to autonomous vehicles, but in 2015 it made a big investment to catch up. Toyota is investing $1 billion over five years in the Toyota Research Institute to develop robotics and AI technology. The company hopes to launch products based on its Highway Teammate programs in 2020, which would also be just in time for the Tokyo Olympics.

Gill Pratt, CEO of the Toyota Research Institute, believes “none of us in the automobile or IT industries are close to achieving true Level 5 autonomy, we are not even close.” He does, however, believe it’s very likely a number of companies will have Level 4 cars operating in specific areas within a decade, which would certainly be very useful to ride-sharing companies.

Renault-Nissan is counting on its new partnership with Microsoft to help advance the company’s autonomous car efforts. Renault-Nissan plans to release 10 different self-driving cars by 2020.

Volvo: Self-driving on the highway by 2021

Volvo is betting that self-driving cars will change both the ride-sharing industry and the luxury car market. Last year, Volvo entered into a $300 million joint venture with Uber to develop next generation autonomous driving cars. Volvo is providing the physical vehicles for Uber’s self-driving tests.

Volvo CEO Hakan Samuelsson said in an interview, “It’s our ambition to have a car that can drive fully autonomously on the highway by 2021.” He envisions that full autopilot would be a highly enticing option on premium vehicles and will initially cost $10,000.

Volvo has already taken steps to avoid some of the consumer concern and legal issues that could slow the development of self-driving vehicles. In 2015, Volvo became the first car company to promise to accept full liability whenever one of its cars is in autonomous mode.

Hyundai is working on self-driving vehicles but with more of a focus on affordability. In an announcement Hyundai claims it is “developing its own autonomous vehicle operating system with the goal of using a lot less computing power. This will result in a low-cost platform, which can be installed in future Hyundai models the average consumer can afford.”

Hyundai senior research engineer Byungyong You told Drive, “We are targeting for the highway in 2020 and urban driving in 2030.”  To achieve this goal, Hyundai is investing 2 trillion won ($1.7 billion) and hiring over 3,000 employees for its self-driving car program.

Daimler also announced this month a high-profile development agreement with Bosch, one of the largest parts suppliers. The goal is to bring both level 4 and level 5 autonomous vehicles to urban environments “by the beginning of the next decade.” This announcement came less than a month after Bosch announced its own collaboration with chip maker Nvidia to develop self-driving systems.

Ola Källenius, Daimler’s new head of development, expects large-scale commercial production to take off between 2020 and 2025.

It’s likely that Daimler’s current best-known autonomous vehicle project has been it’s “Freightliner Inspiration Truck” (see image below), which is the first of it’s kind of be permitted to drive autonomously along Nevada’s highways.

Fiat-Chrysler: CEO expects there to be some self driving on the road by 2021

The experience has convinced Fiat-Chrysler CEO Sergio Marchionne that self-driving cars are farther along that he once thought. He suspects that they could be on the road in five years. He did not say whether he expects his company to have self-driving cars by then, though.

Last year, BMW announced a high-profile collaboration with Intel and Mobileye to develop autonomous cars. Officially the goal is to get “highly and fully automated driving into series production by 2021.”

Elmar Frickenstein, BMW’s senior vice president for autonomous driving, said that the company should have Level 3 cars by that deadline but that it is possible BMW could even deliver cars with Level 4 or 5 capacity in 2021. Whether that capacity would be implemented depends on regulatory and infrastructure concerns.

As a smaller startup car maker, Tesla has always focused on pushing the edge of technology. Last year, Tesla began making sure all its cars had the hardware needed for full self-driving capabilities even before the software/data was ready. Tesla constantly updates its car’s software to improve safety.

Musk has predicted that by the end of this year a Telsa will be able to drive from Los Angeles to New York City without a human touching the wheel.

Concluding thoughts for the business of autonomous vehicles

As a whole, the industry expects to see a significant number of cars with some self-driving capacity on the road by the early 2020s, with the first vehicles mostly being luxury cars or part of commercial fleets.

There are two important considerations when looking at car company predictions. First, there are a lot of reasons for companies to be slightly overly optimistic, such as generating national or company pride, earning media attention, boosting engineer recruiting efforts, and appealing to investors. They are few incentives, meanwhile, to be publicly pessimistic. A savvy business reader should always bear this in mind.

The other consideration is that self-driving adoption timelines depend heavily on regulatory developments in the next few years. Autonomous vehicles require the right legal and technological frameworks. There are serious liability concerns when machines operate themselves in a potentially dangerous environment. Obviously, a car company doesn’t have much incentive to mass produce a true self-driving car if there is nowhere it can be legally driven, or if the legal liability would be considered too risky.

But even with a heavy degree of skepticism, it seems likely that if you live in a major city you will be able to hail some form of automatic car ride in less than a decade.