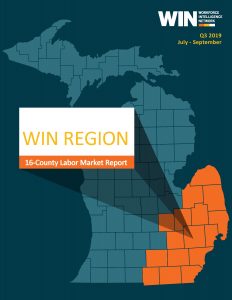 In the third quarter of 2019, the labor force and employment figures increased in southeast Michigan. A greater change in labor force than in employment caused the number of unemployed individuals to increase in the region. The unemployment rate rose from the 4.2 percent quarterly rate in Q2 2019 to the current rate of 4.6 percent in Q3 2019.

“The rise in the unemployment rate between Q2 and Q3 2019 is due primarily to the increase in the size of labor force, meaning more individuals were looking for work,” said Workforce Intelligence Network (WIN) Executive Director, Michele Economou Ureste. “For the last several years, we have seen the labor force grow between August and September, and 2019 has continued that trend.” 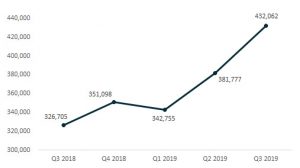 Data from the third quarter of 2019, including posting information from July, August, and September, showed continued expansion in employer demand levels in southeast Michigan. There were 50,285 more postings during Q3 2019 compared to the 381,777 postings made by employers during Q2 2019, and 105,357 more than during Q3 2018.

Though postings often increase throughout the year, a sustained growth of ten percent per quarter is unusual. There are over 100,000 more postings in Q3 2019 than in Q3 2018. IT employers posted just under 10,000 more advertisements between July and September than April through June, with top job Software Developers, Applications accounting for 3,000 of the new postings.

While only 55 percent of job postings identified a minimum education level, nearly half (41.6 percent) of the 236,255 postings in southeast Michigan requiring specific education indicated the need for candidates with a bachelor’s degree. Another 34.4 percent of these postings were seeking applicants with a high school diploma or equivalent. 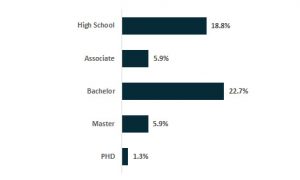 “The Engineers and Designers, IT, and Business and Finance groups most frequently require college degrees, said Michelle Wein, Director of Research and Regional Initiatives at WIN. “Seven of the top twenty entry-level jobs and eight of the top twenty overall occupations typically require a bachelor’s degree for entry.”

Over a quarter of overall postings in the region, or 113,512 online job ads, were open to individuals with zero to two years of previous work experience. These entry-level jobs represent the top posted occupations for this experience level, and many reflect the overall top jobs. Many applicants for these entry-level occupations, regardless of education requirement, could benefit from taking some coursework to develop the skills requested in job postings.

“It remains a core objective at WIN to work with our educational and workforce agency partners to prepare our workforce for the in-demand jobs the southeast Michigan region has available,” said Economou Ureste.

The full Q3 2019 labor market report for the 16-county region analyzed by WIN, as well as the City of Detroit, and the latest data and research projects and reports are available at www.winintelligence.org/data-research/labor-market-reports.