In the fourth quarter of 2019, the labor force decreased in southeast Michigan, though employment figures increased. This movement caused the proportion of unemployed individuals to decrease significantly in the region. The unemployment rate fell from the 4.6 percent quarterly rate in Q3 2019 to the current rate of 3.5 percent in Q4 2019. This change follows a dramatic uptick in the labor force throughout the first three quarters of 2019.

During 2018, the most recent census year, there were about 2.85 million people in the labor force, meaning they were either working or looking for work, in southeast Michigan. Slightly less than half of the population, or about 2,650,327 individuals living in the region were actively working. The highest unemployment rates were seen in those aged 24 years old or younger, indicating an opportunity to recruit young talent for those occupation groups facing an aging workforce.

Data from the fourth quarter of 2019, including posting information from October, November, and December, showed slowing employer demand in southeast Michigan. There were 104,895 fewer postings during Q4 2019 than the unusually high 438,640 postings made by employers during Q3 2019. There were also 14,598 fewer postings than in Q4 2018. Seasonal changes in job postings for each occupation group throughout 2019 are shown below. 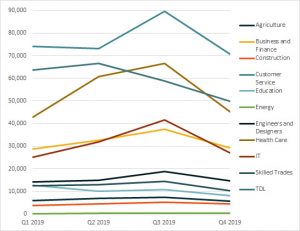 While only 58 percent of job postings identified a minimum education level, nearly half (41.5 percent) of the southeast Michigan postings requiring specific education indicated the need for candidates with a bachelor’s degree. Another 22.2 percent of these postings were seeking applicants with a high school diploma or equivalent, a lower percentage than the 34 percent during Q3 2019. The Engineers and Designers, IT, and Business and Finance groups most frequently require college degrees.

Over a quarter of overall postings in the region, or 83,841 online job ads, were open to individuals with zero to two years of previous work experience. These entry-level jobs represent the top posted occupations for this experience level, and many reflect the overall top jobs. Seven of the top 20 occupations typically require candidates to have a bachelor’s degree. Health Care positions are more heavily represented among entry-level openings than overall top jobs.

In many cases, employers’ posted job requirements may be different than the BLS-indicated entry education information, suggesting that in some cases, such as IT, certifications and work experience may be considered alongside degrees. In all occupation groups, soft skills such as management, troubleshooting, and communication are in high demand by employers.

The full Q4 2019 labor market report for the 16-county region analyzed by WIN, as well as the City of Detroit, and WIN’s latest data and research projects and reports are available at www.winintelligence.org/data-research/labor-market-reports.